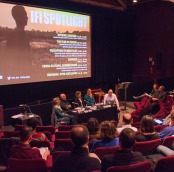 See a gallery of photos from the Saturday Seminar on Facebook. Photo credit: Ian Campbell.

Listen back to a series of podcasted discussions:

Spotlight 2014: The Year In Review [podcast] by Irishfilminstitute on Mixcloud