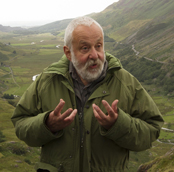 Filmmakers, including Mike Leigh, and special guests to visit the IFI in October for a host of Q&As!

The IFI will be the place to visit this October for all those interested in meeting their heroes and hearing about the work of Irish and international directors and producers. Tickets for all of these Q&As are on sale now so don’t miss out!

We are delighted to welcome acclaimed British director Mike Leigh on Sunday, October 19th (18.30) as takes part in a Q&A following a special preview of his new feature, the award-winning Mr. Turner. Leigh has fulfilled a long-held ambition to make a film about British painter J.M.W. Turner, who is embodied in an incredible, physical performance from Timothy Spall.

Niall Heery, director of Gold which opens on Friday, October 10th, will attend the 20.30 screening that evening, and will be interviewed on stage after. Gold centres on homeless misfit Ray (David Wilmot) who turns to one-time girlfriend Alice (Kerry Condon) for both shelter and the rare chance to see his estranged daughter, teenage athlete Abbie (Game of Thrones’ Maisie Williams). Ray’s presence doesn’t suit tightly wound ‘performance coach’ Frank (James Nesbitt), Alice’s current partner and the man Abbie considers her father, and his fears are quickly realised as Ray’s well-meaning attempts to be a parent upset the balance of this small-town family.

It is 1971, and with escalating tensions in Northern Ireland, Gary Hook (Jack O’Connell) is one of a number of young English soldiers sent to keep the peace on the streets of Belfast. Clueless about the politics of the place and ill-served by his commanding officers, Hook is left to fend for himself in an unfamiliar, unforgiving city after a routine house search descends into a chaotic riot and he is separated from the rest of his unit… To accompany the opening of the exhilarating ’71 (from October 10th), we’re pleased to have its director, Yann Demange, and its writer, Gregor Burke, at the IFI on Friday, October 17th for a talk following the 18.30 screening.

On the night of September 29th, 2008, the Irish government decided to guarantee the entire domestic banking system. That decision was made by a handful of men in a room in the middle of the night. By the time the costs can be fully counted, in another 30 years or so, it will have cost over €60 billion – the most expensive bank rescue in history. The Guarantee tells the story of that night, and what led to it. Starting four years earlier, it charts the peak of the boom and the beginning of the bust. On Thursday, October 30th, the IFI will screen a preview of this film followed by a satellite Q&A hosted by Matt Cooper.

Never has journeying into the world of Ireland’s dead been as enlightening an experience as it is in One Million Dubliners, a fascinating exploration of Glasnevin Cemetery that was joint winner of the Best Irish Feature Documentary award at this year’s Galway Film Fleadh. Director Aoife Kelleher and producer Rachel Lysaght will participate in a Q&A following the opening night screening on Friday, October 31st (18.30).

We’re also pleased to welcome a series of guest hosts who will introduce screenings of Tony Benn: Will and Testament (Oct 3rd – 9th), an intimate reflection on the life, work and passions of an inspiring and brilliant figure in a documentary that takes the form of an extended interview with Benn and is illustrated with great archive footage.

IFI Kinofest returns from October 9th to 12th, presenting the very best in German cinema. This year we’re delighted to welcome producer Stefanie Groβ who will attend the opening film, Broken Glass Park, and actor Antonia Bill who will be present for the closing film, Home from Home: Chronicle of a Vision.

In partnership with the Romanian Cultural Institute in London and the Embassy of Romania in Ireland on the occasion of Romanian Cultural Days in Dublin, the IFI welcomes director Stere Gulea to present his latest film, the funny and poignant I’m an Old Communist Hag, on Friday, October 10th at 18.30.

This month’s Ireland on Sunday offering is We Were There, a captivating documentary featuring the unique experiences of women in the predominantly male world of the Maze/Long Kesh Prison during The Troubles. The screening on Sunday, October 19th (13.00) will be followed by a Q&A with directors Laura Aguiar and Cahal McLaughlin.

Artist and filmmaker Tony Hill will be present at the IFI & Experimental Film Club event, Tony Hill – Gravity Play (October 20th, 18.30), to enact his cinematic performance ‘Point Source’ and will take part in a Q&A.

Finally, this year’s annual gore-fest, IFI Horrorthon, returns from October 23rd to 27th and, of course, will have some special guests! Look out for Frank Henenlotter (Basket Case, Brain Damage, and Frankenhooker) who will introduce his screenings and present his new offering, That’s Sexploitation!, and scream queen Jessica Cameron who will introduce her acclaimed directorial debut, Truth or Dare.