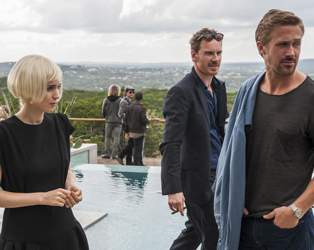 On the surface, the story told here of love, doubt and betrayal, is distinct yet familiar.

Faye (Rooney Mara), a young woman drifting at the edges of the Austin music scene, goes out with BV (Ryan Gosling), a gifted songwriter who is equally inclined to wander. When BV is signed by Cook (Michael Fassbender), a well-connected but ultimately dissolute music producer, the three become close, until the attraction between Cook and Faye breaks up her relationship with BV.

None of this progresses as you might expect however, as the film assumes an impressionistic quality, prioritising inner monologue over conversation and mood over narrative structure. With cameos from Patti Smith, John Lydon and Val Kilmer, the film blends real life with other-worldly moments to create something unique and alluring.