Join us for our monthly focus on new Irish film and filmmakers.

While trying to offload secondhand cigarettes, two 12-year-olds, Darren and Leon, become embroiled in a saga involving counterfeit football jerseys. Conceived in the style of a bootleg VHS, award-winning filmmaker Michael Higgins plunges viewers into the depths of inner-city Dublin, where the kids earn their pocket money and encounter girls, guns, drugs and disorganised crime.

Higgins crafts a film that is both highly experimental and entertaining with moments that are genuinely endearing. Unlike many films employing retrograde technologies, Smolt feels genuine and, at times, lingers on the question: are we seeing something we shouldn’t?

Filmmaker Michael Higgins will participate in a post-screening Q&A. 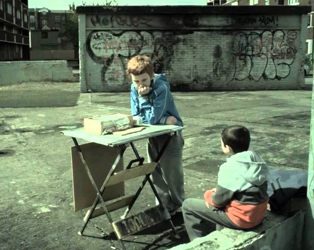