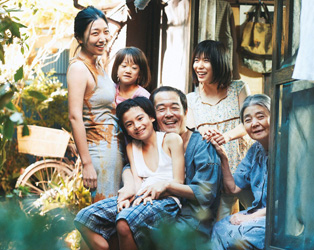 This film was released on 23rd November 2018, and is no longer screening.

Hirokazu Koreeda (Like Father, Like Son; Our Little Sister; After the Storm) deserves to be recognised as one of the most prolific directors working today. With the superlative Shoplifters, he has delivered another brilliantly observed and deeply moving drama of working-class lives, a worthy winner of the Palme d’Or at this year’s Cannes Film Festival. Osamu (Lily Franky) is the patriarch of an extended family of swindlers, thieves and con-artists; a Fagin-like character, he schools his charges in the arts of petty pilfering whilst holding down a legitimate construction job. One freezing winter night he stumbles upon a little girl lost and takes her under his wing, ignoring extensive news coverage of the child’s disappearance, a reckless act that causes a crisis in his criminal collective.