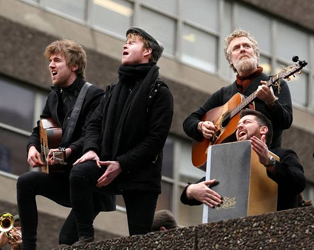 The screening will be followed by a Q&A with Jim Sheridan, Aisling Hedderman, Brendan Ogle, Neili Conroy and Dean Scurry, hosted by journalist/ lecturer Harry Browne.

The story of a grassroots movement as told by its key protagonists, community activists and the artists who joined them – Jim Sheridan, Terry McMahon, Hozier and Glen Hansard.

Their campaign to raise awareness of homelessness in Dublin culminated in the bold takeover of Apollo House, a vacant NAMA-controlled office block, and its conversion into a temporary shelter for homeless people in Dublin, sparking massive media attention in the run-up to Christmas 2016.

Zahara Moufid’s documentary provides extensive coverage of the events and intimate access to those involved, revealing their commitment to the campaign but also their doubts about the effectiveness of their actions.