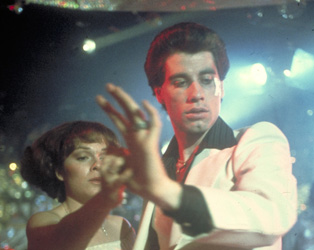 Strut your stuff at this month’s Bigger Picture as we revisit Saturday Night Fever. The film stars John Travolta as Tony Manero, a young man living at home and working in a hardware store in Brooklyn. To escape his difficult relationship with his parents, his dead-end job, and his romantic struggles, Tony, who dreams of moving to Manhattan to start a better life, spends his Saturday nights at the local disco. Far more complex and dark than might be realised by those who know the film only for its Bee Gees soundtrack and Travolta’s white suit, it remains an engaging watch.

The screening will be introduced by award-winning writer and disco aficionado Ed King.