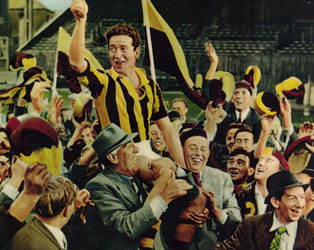 The screening was introduced by Dr Seán Crosson, author of Gaelic Games on Film (Cork University Press, 2019) which launched at 18.00 prior to the film.

Rooney, adapted from the popular Catherine Cookson novel, follows the trials and tribulations of Rooney (John Gregson), dustbin man by trade and hurler by passion. From his digs in the bustling O’Flynn household in Rathmines, Rooney is selected for the Dublin hurling team but the road to Croke Park is not smooth and he meets romantic entanglement and inadvertent thievery along the way.

Memorable for its Dublin locations, its stellar cast (Barry Fitzgerald, Marie Kean, Jackie MacGowran and Noel Purcell), and the daring insertion of Gregson into the actual 1957 Final, Rooney is a delight for GAA fans and all lovers of warm period comedy.