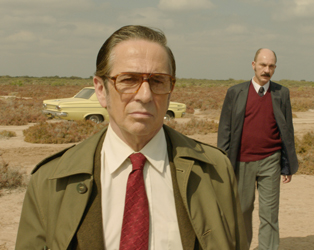 This film was released on Friday 6th September 2019 and is no longer screening.

The year is 1975, a few months before the military coup d’état that will overthrow the Argentinian government, and the atmosphere is heavy with paranoia and anxiety. Claudio (Darío Grandinetti) is a middle-aged lawyer in a provincial town. We are introduced to this prosperous character in a brilliantly sustained pre-credit sequence where he gets into an altercation with a mysterious stranger in a restaurant. Their argument continues onto the street outside, before escalating with drastic consequences. Three months later Claudio’s friend Vivas (Claudio Martínez Bel) presents him with a shady real estate deal involving a recently abandoned house. The two incidents intersect with the arrival of Detective Sinclair (another marvellous performance from Alfredo Castro), an eccentric, Colombo-like figure from Chile who is investigating the disappearance of Vivas’s brother-in-law.