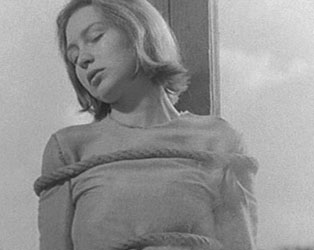 With dialogue culled entirely from contemporaneous transcripts of Joan’s trial itself, Bresson’s film operates on one level as a simple but gripping courtroom drama. However, given the nature of the material, it may also be seen as an indictment of the corruption of institutions when threatened, and of the refusal or inability of individuals to recognise the existence of genuine grace and faith when it presents itself. In contrast to what he called the “grotesque buffooneries” of Dreyer’s The Passion Of Joan Of Arc (1928), this is a more austere retelling of events, with Florence Delay in the lead role in particular offering a more subdued, though no less powerful, portrayal than that of Maria Falconetti in the earlier film.