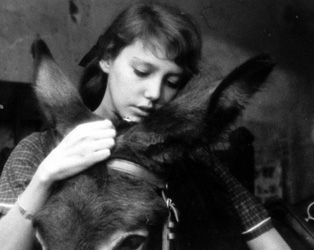 Subject matter as seemingly unpromising as the life of a donkey from birth to death in fact offered Bresson the opportunity to explore the broad canvas of human cruelty and the rarity of kindness, altruism, and self-sacrifice. Reminiscent of Diary of a Country Priest in its focus on a figure who is subject to abasement at the whims of practically all he meets, Balthazar’s suffering is mirrored by that of his first owner, farmer’s daughter Marie (Anne Wiazemsky, making her screen debut), who must undergo her own numerous trials and tribulations at the hands of others. The film is filled with allusions to Christianity, many of which are open to numerous possible interpretations, not least in its deeply moving final scene.