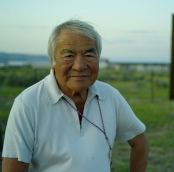 The Board and Staff of the Irish Film Institute are deeply saddened to hear of the death this weekend of Jimmy Murakami.

Jimmy was an internationally acclaimed film-maker, who was nominated for Academy Awards and deeply respected by his peers. His feature–length animated films The Snowman, When The Wind Blows, Battle Beyond the Stars and A Christmas Carol are loved by generation after generation.  The story of his Japanese-American childhood and his incarceration in a Northern Californian concentration camp after the bombing of Pearl Harbour was the subject of a series of paintings he began in his retirement and of a brilliant documentary Jimmy Murakami – Non Alien directed by Se Merry Doyle in 2010.

Jimmy started his career in Burbank, CA and later honed his craft in Tokyo, London and LA before coming to Ireland almost forty years ago. He continued to  produce and direct animated shorts, TV series and feature films and was a key figure in the establishment of the thriving animation industry that we know today. One of our most loyal and committed IFI Council members, it was always a great pleasure to see him – his big warm smile, ready laugh and kind words were the hallmark of a most talented and unassuming man.  Our thoughts are with Jimmy’s wife and daughters at this sad time.