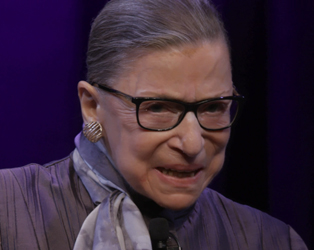 This film was released on Friday 4th January 2019 and is no longer screening.

Associate Justice of the Supreme Court of the United States Ruth Bader Ginsburg has over the course of her illustrious career moved from respected legal practitioner to feminist activist to pop culture icon. Despite the difficulties she faced entering into the legal profession after graduating at the top of her Columbia University class, she spent the 1970s fighting gender discrimination as co-founder of the Women’s Rights Project at the American Civil Liberties Union, making significant advances in equal rights for women in the eyes of the law.

Now one of the more liberal voices on an increasingly conservative bench, her frequent dissenting opinions are closely examined for indications of possible legislative reforms. However, the film is most valuable for its examination of Ginsburg’s origins, her family life, and her extraordinary marriage, offering insight into her motivation and remarkable legacy.