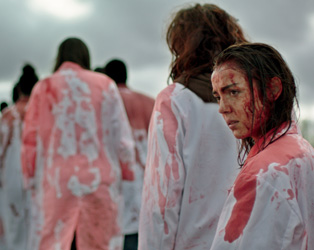 IFI FILM CLUB – Join us for a discussion of Raw following the 18.15 screening on Tuesday April 18th.

Raised a strict vegetarian, 16-year-old Justine (an impressive Garance Marillier) parlays her belief in animal rights into attendance at veterinary college, where her elder sister is already a student. On arrival, she and her classmates are forced to endure a series of hazing rituals which include the eating of raw meat.

Despite her misgivings, Justine is persuaded to assent, and although she initially experiences a violent physical reaction to her transgression, she soon comes to crave the pleasures of the flesh, in all its forms. The tropes of horror have often been used to explore female coming-of-age stories, whether in Brian De Palma’s Carrie (1976) or John Fawcett’s Ginger Snaps (2000), and while Raw nods to these and other predecessors, director Julia Ducornau has created something fresh and original which leaves the viewer with much to consider.