PRISONERS OF THE MOON (IRISH FOCUS)

The screening was followed by a Q&A with director Johnny Gogan and writer Nick Snow.

This new documentary, directed by Johnny Gogan and written by Nick Snow, tells the story of Arthur Rudolph, a scientist who played a key role in NASA’s historic 1969 moon landing. Rudolph was one of over 100 Nazi V-2 rocket engineers secretly brought to America in 1945 to work on the Cold War missile programme. He became a key figure in NASA’s space race, but was arrested in Toronto in 1990 on suspicion of being a war criminal.
The dramatised trial (featuring Jim Norton and Cathy Belton) animates this revelatory documentary which uses archive material, expert witness interviews, and the testimony of Jean Michel, a slave labour survivor of the subterranean wartime V-2 Rocket factory where some 20,000 people died.

As the 50th anniversary celebrations of the NASA moon landing continue, this is the story of America’s desperation to beat Russia to the moon at all costs. 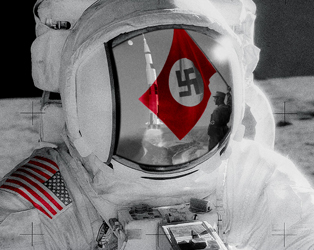