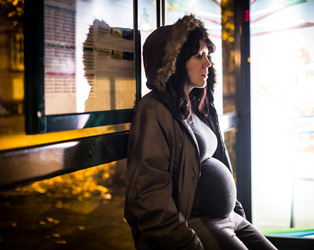 Ruth (Alice Lowe) is heavily pregnant and mourning the loss of her husband; she feels a deep connection to her unborn child, however this baby is psychically prompting her to go on a killing spree. Initially targeting grotesque male figures, ‘Ruthless’ Ruth’s rampage turns out to be less of a feminist cleansing and more of a strategic vendetta.

Veteran British comedian Alice Lowe has chosen a deliciously twisted premise for her debut feature as director; working tirelessly on the UK TV comedy scene since her breakthrough role on the priceless Garth Marenghi’s Dark Place (2004), she came to big screen prominence with Sightseers, the 2012 comedy she co-wrote with director Ben Wheatley (Kill List, High-Rise) and starred in with Steve Oram. That Lowe was pregnant during the filming of Prevenge only heightens the blacker-than-black humour of the piece.