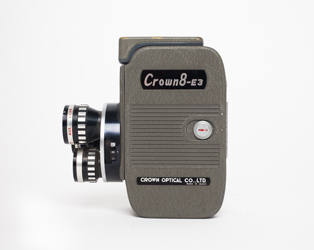 A selection of Cine equipment from the vaults

The IFI Irish Film Archive holds, along with its moving image and document collections, an array of objects and equipment related to filmmaking. The Archive does not have an equipment collecting policy, and items have been acquired in an ad hoc manner over the last 20 years, often being deposited with collections of film.

As this collection is rarely seen by the public we are pleased to share images of some of these objects taken by DIT photography student Joe Carson as part of his degree project. His selection is an eclectic sampling of vintage cine equipment manufactured from the 1930s to the 1970s, with items chosen on the basis of their aesthetic beauty and the variety of their design.

The items have been captioned by Archive Collections Officer Gavin Martin. (Captions are featured with each image in the gallery below, and as text underneath on this page.)

The Kodascope Eight Model 35
This later model in the Kodascope series was manufactured in the 1930s to project the new 8mm format, which arrived in 1932. Kodascope library titles were also released on this cheaper new 8mm format.

Paillard-Bolex Model G 916 Projector
Paillard- Bolex introduced the Model G projector in 1936, and it became popular in the years preceding World War II. The ‘G 916’ was of Swiss design and manufacture, intended for home and school use. It is a dual-gauge projector designed for both 16mm & 9.5mm film. An accompanying kit of parts, which included sprockets and rollers, enabled the user to adapt the machine to either format. The average weekly wage in 1937 was approximately £6, so this projector retailing at £45cost a small fortune at the time.

Bell & Howell Filmo Auto Load 16mm camera, circa 1940
Exceptionally compact for a 16mm camera for its time, this camera’s name suggests the speed with which it could be loaded by simply slotting in a 16mm cartridge. Commencing in 1923, Filmo was a line of 16mm movie equipment made by the Chicago-based Bell & Howell Company, whose cameras were used by US military during World War II.

Bell & Howell One Nine standard 8mm cine camera
Taking its name from its fast f1.9 aperture, this camera came out in 1953. These cameras became very popular for home-movie making in the US, during the post-War baby-boom era. In fact it was an 8mm Bell & Howell camera that amateur filmmaker Abraham Zapruder used to film the JFK assassination in 1963.

Zeiss Moviekon 8b
One of Zeiss’s 1952-1959 series of unusually shaped 8mm cameras. Ergonomically designed to fit in the operator’s hands & completely clockwork, the camera has a horizontal design, in which the film ran side- to- side, twisting as it crossed the gate in middle. With the option of six different frame rates, and boasting an internal light meter, this is the advanced model in the series, which came out in 1959.

C. Model 642 Cardiline Microphone
The manufacturers received an academy award in 1963 for this shotgun style microphone. Donated by Elizabeth Hunt, widow of Peter Hunt, the prolific Irish sound recordist whose name appears on the credits of numerous professional Irish films in the 1950s and 1960s, notably the Amharc Eireann Newsreel Series.

E10. Polaroid 800 Land Camera
This early instant camera that used self-developing film was named a Land camera after Edwin Land, the inventor of the instant process, and was manufactured by Polaroid from 1947-1983. This is the Model 800, which was manufactured from 1957-1962. The type of film used in this camera was discontinued in 1992. Before instant digital imaging and playback, Polaroid cameras were frequently used to test studio lighting set-ups before the film cameras rolled.

E11. Eumig P8 8mm projector
In 1954 the Austrian manufacturer Eumig pioneered projector design, by introducing the world’s first low voltage lighting system in their machines. Previous projector lamp wattages were as high as 1000 watts, but with the Eumig, a lamp of only 100 watts was needed, making the machine ideal for home use.

E13. Crown 8 E3 Cine Camera
A clockwork 8mm camera with rotatable turret lenses. Made in 1959 by Crown Optical a prolific Japanese camera maker prevalent in the 1950s and 1960s.

E15. Cine Canonet 8 Camera
Marketed in 1963, this camera fulfilled Canon’s goal of reducing the price of 8mm cine cameras. Its innovative electric motor is neatly contained in an elegant slim design, allowing it to slip into a coat pocket.