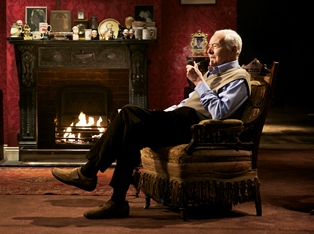 Tony Benn lived a life that was arguably the most documented in post-war British politics. Although these accounts were, admittedly, provided by Benn himself, in the form of the meticulously kept diaries of his time in Parliament, it seems fair to suggest that the task of making a documentary about him in the months before his death must have posed a daunting prospect for filmmaker Skip Kite. The strengths of Tony Benn: Will and Testament,  however, lie not just in the telling of Benn’s story, which at times is clouded by the sentimentality that Benn himself found unnerving (his transition from most dangerous man in Britain to national treasure was one that he felt entirely ill-at ease with, and remains an image that the film does go some way to reinforce) – but in the telling of so many stories bound up in the political landscape in which Benn would work and operate.

Perhaps unsurprisingly, the film opts for a largely chronological account of Benn’s life, although there are exceptions – for example, a first introduction to Benn that takes place within his old family home, where he speaks candidly about the death of his greatest influence and love – his wife, Caroline DeCamp. Kite clearly uses this section to humanise Benn from the outset, deliberately depoliticising him perhaps in order that he be audience-ready and likeable even to those of differing political inclinations. Moments later, and Benn is seated amongst an impressive and vast set in Ealing Studios, his office and fireside recreated perfectly, and contrasted with a tableaux of the most damning newspaper front pages and recreation of the Occupy London campsite, an iridescent Dollar sign hanging ominously above the mess. The overall impression recreates something of Lars Von Trier’s Dogville – and this mesh of the historic, the present and the surreal leaves an altogether ethereal impression. The effect is of watching a play – but the image of Benn seated amongst the fragments of his own life, and matters of importance to him, is particularly striking. In this way, Kite paints an honest portrait of a man, facing death, and reflecting upon the triumphs and failures of his life. It also serves to contextualise the political narrative within its time – we return to the set throughout the film, and observe Benn watching both family videos, and the events of September the 11th unfold from the same armchair.

Though the film walks us through various events of Benn’s political career, its efforts to impress Benn’s staunch opposition to Thatcher upon an audience are particularly compelling. The choice of footage from Kite is brilliantly tied to Benn’s commentary – and still startlingly barbaric to watch, even so many years after the fact. Certainly, this is not an impartial portrait of events, overlaid as it is, by the jovial strains of The Beat’s Stand down Margaret but nevertheless serves as fierce reminder as to the gravity of the situation. Particularly stirring, and well-maneuvered by Kite are the segments of police brutality at the time of the miners’ strikes, interspersed with Margaret Thatcher’s recitation of the prayer of St. Francis of Assisi, following her election in 1979. “Where there is discord, may we bring harmony” – and a cut to a man being beaten on the ground by police with batons; “where there is error, may we bring truth” gives way to police on horseback, charging an unarmed woman; “where there is despair, may we bring hope” and we see an elderly lady, quite obviously posing no threat to civil harmony, roughly pushed aside by a policeman. The sheer criminality of the police in the footage, contrasted with Thatcher’s rhetoric only serves to highlight the absurd detachment of one from the other. The later segments of one of Benn’s most famous interviews, in which he exposes the police for arresting people for their political inclinations alone, does truly identify Benn’s championing of the miners’ cause, a triumph which aptly deserves its commendation. These key sections of Benn’s life are tied to the events as mirrored in film – Pete Postlethwaite’s brilliant monologue in Brassed Off, fittingly included to mark the unheard voice of the miners.

There is a sense in which Will and Testament could be described as a moral film – purely by virtue of the events it covers. Though it highlights the media’s demonisation of Benn, it undersells itself by not really exploring why even those on the left chose to vilify him so. There’s a worry too, that this film was really made by Benn – for Benn – and his obsessive diary-keeping and publishing reminds us that he did place an onus on what legacy he might leave. But the pace the film sets is cleverly done – be it war-like urgency, or the slow march of old age. Though not fair to say the film is a well balanced account of Tony Benn, man and politician, it’s certainly moving, and, at times, when the strengths of the set and of the events of Benn’s life come together, it’s also beautifully cinematic. It offers an important social commentary, on fifty years of history, carefully examined by a truly present if not continuously powerful political voice. To an extent, one can’t help but feel that with an orator such as Benn as subject, the film would have played out quite naturally and wonderfully of its own accord. But in tying together history, the development of an intelligent and cohesive political framework, and a picture of a man of so unshakably instilled principles, Kite truly grafts something brilliant; and, in including Benn as actor within the political circus of his own life, he manages to create an altogether more philosophical piece of work than a mere record of a life. Benn lived a life of great importance, and fittingly is commended with a film nothing short of such an accolade.