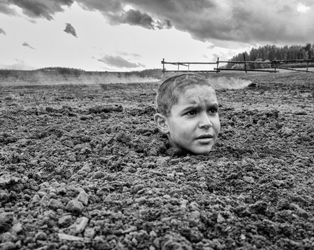 This film was released on the 11th of September 2020, and is no longer screening.

Based on Jerzy Kosinski’s acclaimed novel, and shot on luminous monochrome 35mm, The Painted Bird is a meticulously crafted evocation of wild, primitive Eastern Europe at the bloody close of World War II. The film follows the journey of The Boy (Petr Kotlár), entrusted by his persecuted parents to an elderly foster mother. The old woman dies, and the Boy is on his own, wandering through the countryside, from village to village, farmhouse to farmhouse. As he struggles to survive, he suffers through extraordinary brutality meted out by the ignorant, superstitious peasants, and witnesses the terrifying violence of the ruthlessly efficient soldiers, both German and Russian. There are moments of compassion amid the savagery: a German soldier (Stellan Skarsgård) spares the Boy, a priest (Harvey Keitel) intervenes on his behalf, and he becomes the protege of a Russian sniper (Barry Pepper).