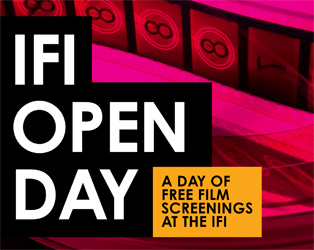 It’s that special time of year again – the IFI Open Day on Saturday, June 15th! Join us to celebrate all that the IFI has to offer with a day of FREE previews, classics, Irish and international films. A day-long cinematic feast that won’t cost you a thing!

Plus, we’re delighted to announce that the winner of our Audience Choice poll this year is Good Vibrations! This affectionate and witty celluloid tribute to Terri Hooley, mover and shaker of 1970s’ Belfast who raised two fingers to the Troubles, will return to the big screen at 20.50.

The IFI is throwing open its doors once again to film fans of all ages and cinematic tastes with a day full of screenings that will amuse, entertain, delight and inspire audiences. Whether you’re an IFI regular or visiting us for the first time, you’ll find something to enjoy in our eclectic array of films on offer. With 13 free screenings throughout the day, including our Audience Choice where we bring a recent favourite back to the big screen, it promises to be an event to remember.

While you’re visiting the IFI, why not treat yourself to a coffee or a bite to eat our IFI Café Bar, or find that elusive DVD you’ve been hunting for in the IFI Film Shop. The IFI Café Bar will also be putting on a BBQ from 5pm so make sure to stay for some delicious summer burgers and beers with our special offer of a burger for €5, a pint for €4, and a Burger/Pint Combo: €8.

TICKETS
Tickets for all films will become available at 11am on June 15th at the IFI. Tickets will not be available online or by phone. There will be a maximum of four tickets per person, all allocated on a first-come, first-served basis. Arrive early as tickets are expected to quickly!

SPECIAL IFI MEMBERSHIP OFFER ON IFI OPEN DAY!
We are delighted to offer a one-off Membership deal available on the IFI Open Day with Memberships on sale for a bargain of €20 (normally €25); Concession Memberships €10 (normally €15) and Best Memberships €89 (normally €99). For this day only, you can avail of this offer online or in person at the IFI on June 15th only!

IFI Members get CHEAPER tickets, DISCOUNTS at IFI Café Bar and IFI Film Shop, double loyalty points which add up to FREE tickets and the chance to see a FREE preview every month* at the IFI. Plus when you buy or renew you will receive a FREE off peak cinema ticket! *Terms and conditions apply. THE 5,000 FINGERS OF DR. T. (13.00)
The only feature film written by Dr. Seuss, this is a typically day-glo fantasy in which young Bart Collins is forced to endure piano lessons at the strict hands of Dr. Terwilliker. These lessons inspire a dream in which Dr. T. has constructed a piano so large that it will require 500 boys to play it properly.

We are pleased to welcome David Maybury of Irish animation company Brown Bag Films, who will introduce this screening. FEAR AND DESIRE (13.10)
Stanley Kubrick’s first feature was out of circulation for decades, partly due to the efforts of the director himself, who did not wish the public to see his debut. An anti-war drama, it contains hints of what was to come in the master’s career. Don’t miss this incredibly rare opportunity to see it on the big screen. THE GREAT WHITE SILENCE (13.30)
Director Herbert Ponting joined Captain Scott’s doomed 1910-1913 Terra Nova expedition to the South Pole, capturing images of great and haunting beauty of the region and its wildlife. A failure on its release (to the extent that Ponting died impoverished), the film has been digitally restored in recent years, giving audiences a unique insight into the exploration of uncharted territory, and its consequences.

We are pleased to welcome Irish writer, broadcaster, speaker and climber Dermot Somers, who will introduce this screening. GODZILLA, KING OF THE MONSTERS! (14.30)
The film that introduced Godzilla to audiences outside of Japan, this Americanised version of the original Gojira adds Raymond Burr as a journalist investigating a sea monster mutated and enraged by radiation as it attacks Tokyo. Made under the shadow of the nuclear threat, it’s now a cult classic thanks to its dubbing, effects, and, of course, its costumes. THE GODFATHER: PART II (15.00)
After last year’s popular screening of The Godfather, this year we present one of cinema’s few truly great sequels. While Robert Duvall, Diane Keaton, and Al Pacino return in their original roles, the film also adds Robert De Niro as the young Vito Corleone, who we see becoming the man we met in the first film, adding to the film’s epic scope.

We are pleased to welcome film critic and journalist John Maguire, who will introduce this screening. PARIS-MANHATTAN (16.00) (PREVIEW)
Lonely pharmacist Alice is devoted to the films of Woody Allen, even prescribing them as medicine to her clients. She asks advice on her life from a poster of him, which answers in dialogue cleverly culled from his own films, in this witty and enjoyable spin on Allen’s own Play It Again, Sam, his play in which he took guidance from Humphrey Bogart. THE LAST OF THE HIGH KINGS (16.30)
This year’s Open Day presentation from the IFI Irish Film Archive is the charming story of Frankie Griffin (Jared Leto), who is spending his post-Leaving Certificate Summer in 1977 Dublin organising a beach party while torn between the various women in his life. A fine supporting cast includes Gabriel Byrne, Colm Meaney, Stephen Rea, Lorraine Pilkington and Christina Ricci.

We are delighted to welcome author Ferdia MacAnna who will introduce this screening. KILLER OF SHEEP (18.20)
Denied a full release for 30 years because of poor quality prints and issues with the music rights, Charles Burnett’s story of the mid-1970s Los Angeles ghetto focuses on the sensitive Stan, whose job in a slaughterhouse is beginning to affect his home life. Shot in a style reminiscent of the neo-realists, it’s a lyrical and highly rewarding film.

The Irish Times‘ film critic Tara Brady will be here to introduce the film to our audiences. LÉON (18.40)
Hitman Léon (Jean Reno) leads a solitary life, until 12-year-old Mathilda (Natalie Portman in her remarkable debut) comes into his life following the murder of her family by corrupt cop Norman Stansfield (Gary Oldman). Taking the vengeful girl under his wing, Léon teaches her the tricks of the trade as a tentative bond forms between the two. THE SUMMIT (18.50) (PREVIEW)
Nick Ryan’s gripping documentary examines the circumstances surrounding a 2008 expedition to climb K2, the “Savage Mountain” considered the world’s most dangerous, and how it became the greatest disaster in the history of such attempts. At its centre is Ger McDonnell, an Irish member of the party, whose disappearance during the descent has never been fully explained.

We are pleased to welcome director Nick Ryan who will introduce this preview screening. RASHÔMON (20.30)
Following its triumph at the 1951 Venice Film Festival, Rashômon has been credited with introducing both Kurosawa and Japanese cinema in general to Western audiences. A nobleman and his wife are attacked by a bandit who kills the man and rapes the woman. But as the story is recounted from the perspectives of four different witnesses, events seem less clear. AUDIENCE CHOICE: GOOD VIBRATIONS (20.50)
We’re delighted to announce that the winner of our Audience Choice poll this year is Good Vibrations! Having screened at the IFI in April during our Spotlight season, this affectionate and witty celluloid tribute to Terri Hooley, a mover and shaker of 1970s’ Belfast who raised two fingers to the Troubles, will return to the big screen once more. THE BLING RING (21.00) (PREVIEW)
Fresh from its world premiere at Cannes last month, we’re delighted to present this preview of Sofia Coppola’s new film starring Emma Watson and Leslie Mann. It’s based on the true story of a group of celebrity-obsessed L.A. teens who used the internet to track down the homes of the stars, and subsequently burgle.