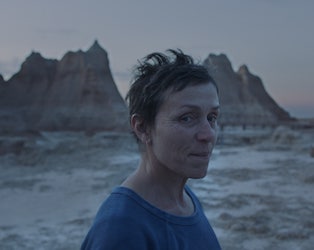 Following the economic collapse of a company town in rural Nevada, Fern (Frances McDormand) packs her van and sets off to explore life as a modern-day nomad. Having collected numerous garlands on the 2020 festival circuit, Chloe Zhao became the second woman, and the first woman of colour, to win the Best Director Oscar, a historic achievement capped by Nomadland also winning Best Film of the year, and gifting McDormand her third trophy. As with her previous films, Songs My Brothers Taught Me and The Rider, Nomadland exists in a hybrid space between documentary and fiction; rather than adapting Jessica Bruder’s nonfiction source text, Zhao uses the book as a springboard, moulding her narrative from Fran’s episodic interactions with a coterie of real life, low-paid migrant workers over the course of a year as they follow a hardscrabble trail of occasional employment through South Dakota, Nebraska, and Arizona. Quietly profound and rapturously beautiful, the film is a paean to human kindness.