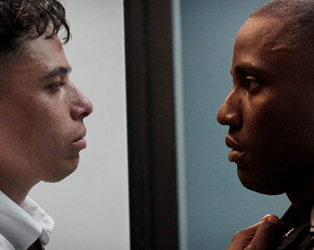 This film was released on Friday 18th  January 2019 and is no longer screening.

The shooting of an unarmed African American man in Brooklyn by a white police officer forces three men to interrogate their responses to the incident. Deftly utilising a tripartite structure, and avoiding outrage and indignation in favour of nuance and subtlety, the film seamlessly shifts perspective from one protagonist to the next, creating a cohesive image of how a community is impacted upon by racism and police brutality. Manny (Anthony Ramos) records the shooting on his cell phone, and is pressed upon by police to stay quiet.

Dennis (John David Washington, BlacKkKlansman) is a conflicted black cop working the case, himself a victim of racial profiling, who must choose where his allegiances lie. High school athlete Zyric (Kelvin Harrison Jr.) begins to question his professional baseball ambitions as he becomes radicalised by the growing protest movement.