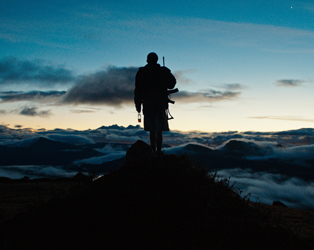 This film was released on Friday 25th October 2019 and is no longer screening.

In a makeshift encampment high in the mountains, a group of eight teenagers, troops in The Organisation, spend their days being put through gruelling physical drills and watching over their American hostage (Julianne Nicholson). The team is led by Dog (Paul Cubides), who has entered into a sanctioned relationship with Lady (Karen Quintero). When their commanding officer charges them with the care of a local farmer’s cow, the dynamic of the group shifts, a change exacerbated by the necessity to move their hostage as opposing forces draw near.

Director Alejandro Landes offers no explanation or context for the conflict or the circumstances of the unit’s formation, making for a strange and occasionally nightmarish experience, the unease frequently heightened by Mica Levi’s remarkable score.

With echoes of Lord Of The Flies and Apocalypse Now, Monos is a singular and unsettling film.