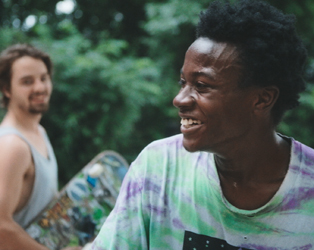 This film was released on Friday 22nd March 2019 and is no longer screening.

Growing up in the economically deprived town of Rockford, Illinois, teenagers Bing Liu and his best friends Zach and Keire are united by their love of skateboarding. From early on in their friendship Liu has been videoing their skateboarding antics with the dynamism and flair of a natural filmmaker. Soon the boys must negotiate the rocky transition to adulthood:Zach learns he is to be a father and Keire struggles with his identity as an African American. Liu begins to shift focus as the years pass, his confidence as a director growing as he tackles the veiled subject of the trio’s variously damaged upbringings, cycles of abuse and toxic masculinity.

Winner of the Special Jury Prize for Documentary at Sundance, Liu’s insightful Oscar-nominated debut feature is graced by empathy and a great visual poetry.