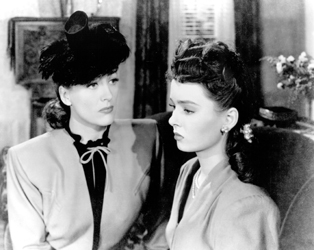 When Mildred Pierce’s second husband Monte Beragon is shot and killed, her first husband Bert Pierce confesses to the crime; wishing to set the record straight, Mildred recounts her life story to the investigating officer through an extended flashback sequence.

When Bert (Bruce Bennett) left her for another woman, Mildred (Joan Crawford) was forced to look for waitressing work to provide for her two children, 10-year-old Kay and 16-year-old would-be socialite Veda, who is embarrassed by her mother’s labours and treats her with derision. Mildred meets and falls for wealthy society playboy Monte (Zachery Scott), who owns the building Mildred wishes to purchase for a restaurant venture, but Veda’s increasingly entitled behaviour threatens to disrupt their plans.