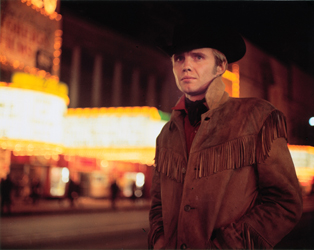 This film was released on Friday 13th September 2019 and is no longer screening.

Famously the first (and last) X-rated film to win the Oscar for Best Picture, Midnight Cowboy sees naïve Texan Joe Buck (Jon Voight) move to New York with misguided dreams of becoming a high-end prostitute. After a disastrous start, he falls in with small-time conman ‘Ratso’ Rizzo (Dustin Hoffman). He reluctantly allows Ratso to become his manager, although he proves no better in the industry than Joe. Despite this, a genuine friendship develops, and Joe comes to share Ratso’s dream of a new and idyllic life in Florida.

Following his star-making role in The Graduate, director Mike Nichols was horrified that Hoffman chose this for his next role, but the actor received his second Oscar nomination for the part. Released in a new 4K digital restoration to mark its fiftieth anniversary, Midnight Cowboy’s gritty depiction of seedy New York life remains hugely influential.