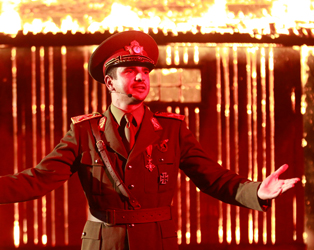 Mariana (Ioana Iacob), a provocative theatre director, is commissioned to commemorate a controversial episode in Romanian history – the much-disputed 1941 massacre of Jews in Odessa by collaborationists. Ignoring the protestations of anxious city officials, she proceeds to mount a deliberately shocking and unpatriotic large-scale public re-enactment of the atrocity. ‘I do not care…’ is a formally audacious interrogation into collective memory, the wilful amnesia of national myth making, and the fraught relationship between the past and present. The film was a deserving winner of the top prize at last year’s Karlovy Vary International Film Festival.