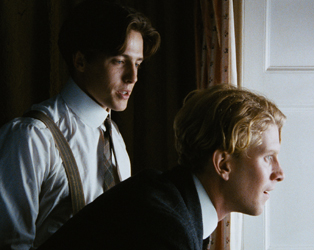 This film was released 27th July 2018, and is no longer screening.

Believing that a novel about same-sex love would be met with public opprobrium and legal censure, E.M. Forster’s Maurice remained unpublished in his lifetime. Following the success of their adaptation of Forster’s A Room With A View (1985), producer Ismail Merchant and director James Ivory tasked themselves with bringing the story to cinema audiences, now screening in a new 4K digital restoration.

At Cambridge, Maurice Hall (James Wilby) befriends fellow students Lord Risley (Mark Tandy) and Clive Durham (Hugh Grant, in just his second film role). He and Clive begin a chaste love affair, but when Risley is imprisoned for homosexual activity, a frightened Clive ends the relationship and instead marries the unaware Anne. Heartbroken and in search of a cure for his ‘condition’, Maurice encounters gamekeeper Scudder (Rupert Graves), with whom he may have a second chance for happiness.