His latest film Animal Kingdom, funded by The Arts Council / An Chomhairle Ealaíon, is an ambitious project which fuses multiple formats including 70mm film, digital video and an immersive 5.1 soundscape to create a sensory overload of sound and image.

Animal Kingdom will premiere at the Irish Film Institute on April 25th 2018 (tickets here). Below you’ll find some words from Kavanagh about a few of the techniques used to bring the film to life:

Animal Kingdom features a broad palette of both contemporary and retrograde technicities.

Each format has its own specific properties and these are written into the media, in addition each form of digital transfer further imprints the material in a manner specific to the transfer process employed. And so there are many ways to interact with this material- to disrupt and decompose it using even the most basic transfer processes and hardware.

For this film I wanted to experiment with hand-painting celluloid, in the past I had mostly burned, bleached and scratched but now a large format frame, such as a 70mm test strip, would afford a larger surface for detailed work.

I painted each frame of 70mm with acrylic paint- moods rupturing between mucky, violent explosions to ornate and topographic patterns. I then prepared each image and scanned the frames one-by-one through a light-bed scanner. To ensure that each frame was symmetrically arranged a small gate/masking was cut from black card. 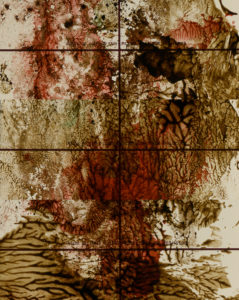 Once the frames were scanned I would process them through Photoshop using a batch editor (correcting brightness, adjusting sharpness, applying a fine layer of grain and adjusting the axis). I would then check each frame and determine whether it would require a local adjustment (usually scans performed late into a session would require further enhancement).

When organised into specific image sequence folders I would use FFmpeg to transcode a simple proxy video file from the 5K source, enabling fluid playback from a compound clip for additional testing and experimentation in the offline edit.

The finished film features this 70mm material throughout in a variety of ways- including rear projection during principal photography. Once the workflow was tested I found that the various steps and media management were perhaps the most relaxing and therapeutic aspects to the entire production.

This hand-painting to digital intermediate process took over 6 months and ran parallel to shooting and post-production.