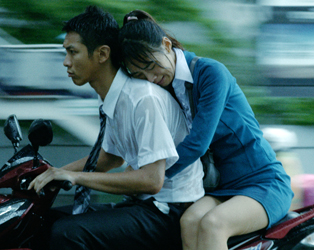 Dr. Wang Chi-Sui, curator of the animation short films programme, will attend the festival and introduce the programme and Midi Z’s The Road to Mandalay before the screening on Saturday May 13th at 18.00.

A contemplative, visual storytelling of the romance between two illegal Burmese migrants facing hardship and obstacles in the pursuit of happiness in Thailand. Like many Burmese citizens seeking to escape the poverty and conflict, Guo and Lianqing enter Thailand illegally.

Once in Bangkok, Lianqing finds underground jobs, saves some money and buys fake identity papers hoping to make it to Taiwan. But Guo plans to save his earnings for a better life back in Myanmar. The story revolves around an ill-fated blossoming love, poetically described through luminous slow shots and visual allegory. Midi Z explores the economic and social problems of his native country and the precarious lives of migrant workers. Absolutely unforgettable.