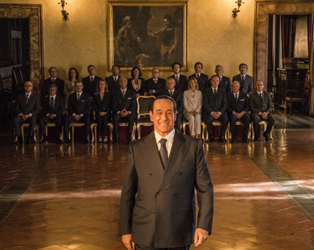 This film was released on Friday 19th April 2019 and is no longer screening.

2008’s Il Divo, a biopic of former Italian prime minister Giulio Andreotti, remains one of Paolo Sorrentino’s most critically and commercially successful films. A decade later, he has returned to politics, this time focusing on the career of Silvio Berlusconi, who perhaps more than any other offers a multitude of possible narratives, many of his own creation, set amid Felliniesque excesses similar to those depicted in The Great Beauty (2013).

Released in Italy as two films, this version combines material from both into a single feature. It follows two main threads. In the first, a young, regional businessman who uses escorts to bribe and corrupt local officials seeks access to Rome and Berlusconi, hoping to acquire greater power, while the second sees Berlusconi (Sorrentino regular Toni Servillo, bearing a truly unsettling grin) battling personal and political difficulties.