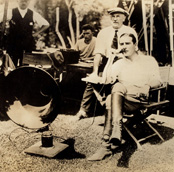 BLOG: Rex Ingram (Part 3 in a series on the Liam O’Leary Archive)

This is the third in a series of blogs by Joanne Carroll about the Liam O’Leary Archive, a collaborative cataloguing project between the Irish Film Institute and the National Library of Ireland. The project is due to be completed in 2017. You can access the previous posts in the series the blog here: Part 1, Part 2. Joanne Carroll will be giving a talk introducing the archive as part of Heritage at the National Library of Ireland on Monday 22nd August, 2016 at 1pm. More details about the event can be found here. Rex Ingram was born Reginald Ingram Montgomery Hitchcock in Rathmines, Dublin in 1892. He emigrated to the United States in 1911 where he studied sculpture at the Yale University School of Art. It was here that he contributed to the campus magazine, the Yale Record submitting humorous sketches and drawings. He moved into acting and finally directing, working for some of the major studios in Hollywood in the 1920s. In 1925 Ingram and his wife, actress Alice Terry, bought the Victorine Studios in Nice and proceeded to produce films there, as well as using it as a base to travel to North Africa. Ingram became fascinated by North Africa and Islamic culture and converted to the faith in the 1930s. He retired from filmmaking in 1936, focusing on his writing and sculpting, and died in 1950 at the age of 58. Rex Ingram’s films were visually stunning and hugely influential to a generation of filmmakers and film aficionados, no more so than Liam O’Leary. In 1980 O’Leary published a biography of the director; Rex Ingram: Master of the Silent Cinema (Dublin: Academy Press, 1980), having started the research for the tome in 1959. He gathered research and materials for the book by writing to various people who knew and worked with Ingram, and carried out a long correspondence with Ingram’s wife, Alice Terry. As a result, the Rex Ingram materials in the Liam O’Leary Archive contain a large amount of letters, research notes, production stills, photographs and various newspaper clippings and articles. The Archive also includes a lovely collection of original drawings and sketches by Ingram, who was a talented artist. The Rex Ingram papers in the Liam O’Leary Archive provide a wonderful insight into one of the world’s greatest silent film directors, and also provides a fascinating perspective on the writing and publishing of a biographical work. Looking through the materials, one is able to see the process of researching and writing a biography. The administrative and sometimes frustrating process of getting a book published is also evident. From the research and letter writing in the 1950s, to the final publication, promotion and reviews of the book in the 1980s, the publication of Master of the Silent Cinema was a labour of love for O’Leary. Although it was a challenge for O’Leary to publish, the book brought one of cinema’s greatest silent directors to the attention of general readers and confirmed his place in Irish and American cinema history.