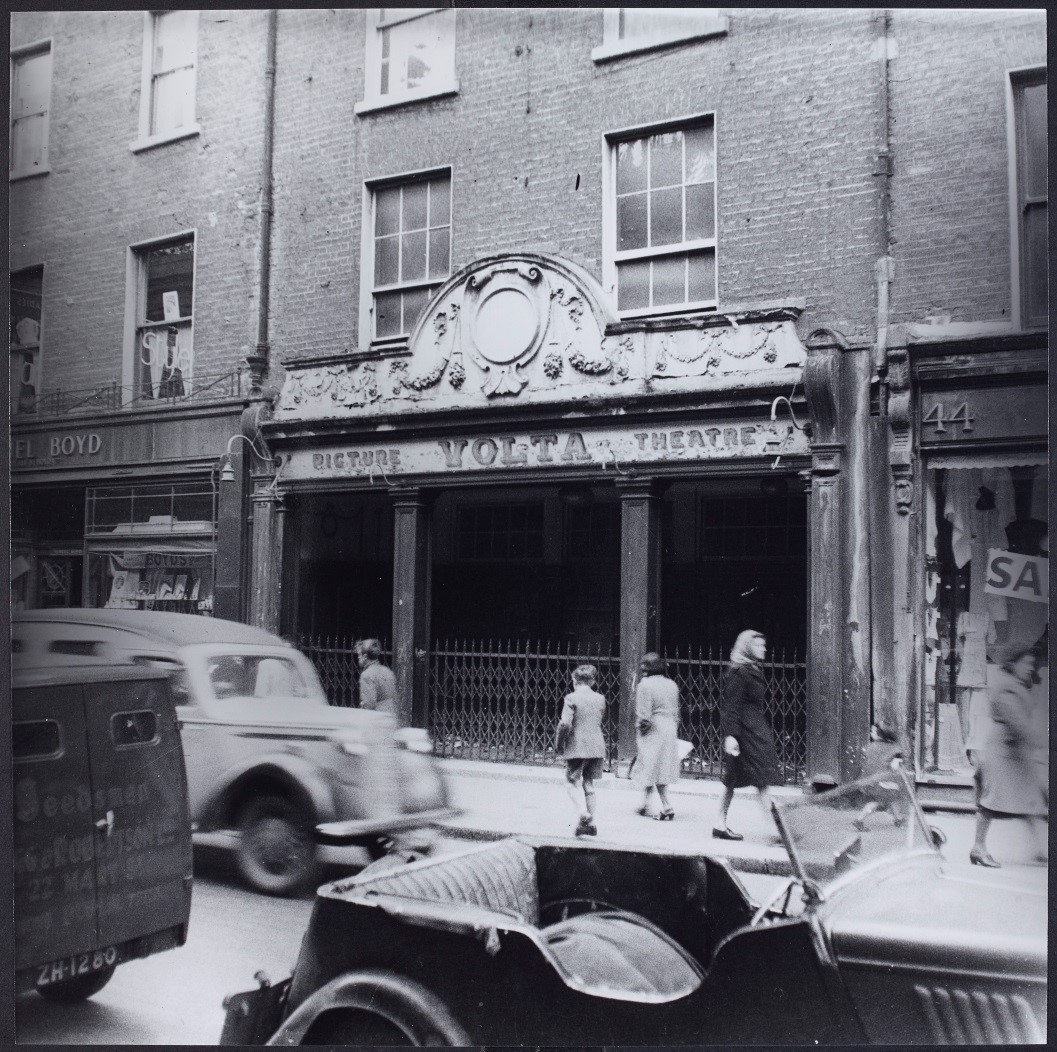 This is the fourth in a series of blogs highlighting the Liam O’Leary Archive; a collaborative project between the Irish Film Institute and the National Library of Ireland. The other blogs in the series can be found here:

As a collector, researcher and lover of all things film, Liam O’Leary didn’t stop at rare film reels or one-of-a-kind posters; he also researched and collected materials relating to cinemas in Ireland. These materials include photographs, cinema listings, newspaper articles, programmes, posters, memorabilia and administrative materials. There are 11 boxes, containing 125 folders and 23 volumes, in the Cinema’s series of the Liam O’Leary Collection; relating to 100s of cinemas on the island of Ireland (there are also materials on cinemas in Great Britain, particularly London). The Volta Cinema, on Dublin’s Mary Street was Ireland’s first dedicated cinema; it’s now a Penney’s and has images of the original cinema in the shop, and a plaque outside to mark the location. The Volta was opened in 1909 by the Italian Cinematograph Society Volta, and managed by none other than the writer James Joyce. Lenny Collinge worked as the projectionist in the cinema and in 1976 when Liam O’Leary launched the ‘Cinema Ireland’ exhibition (which started the archive as we know it today), Collinge introduced the event. O’Leary also interviewed Collinge, who described Joyce as a “very quiet spoken man”, gathering information about the Volta and the cinema industry in the early 20th century. A lot of the early films shown in the Volta were from the Continent, and even had titles and posters displayed in Italian and French. However, the Italian owners soon lost interest (and money) in the endeavour and sold the cinema to British Provincial Theatres, who also owned the Sackville and Grafton Cinemas in Dublin. The Volta survived until 1948 under various guises, including the Lyceum.

The Palace Theatre in Cork was opened in 1897 by Dan Lowrey who also had a variety house in Dublin. It was primarily a variety theatre in its early days but it did screen ‘200 feet of film’ nightly. The theatre went through many phases of use and disrepair over the decades but is now called the Everyman Palace Theatre, and is Cork’s oldest purpose-built theatre. The Liam O’Leary Archive includes articles, reminiscences, photographs and copies of programmes from the theatre. There is also a small collection of engagement books from 1907-1930 noting the various acts that performed in the theatre and the events that took place. The notes include the name of the artist, salary, type of business, agent and remarks on the act; names of films shown are also included. On Monday 1st May 1916, for example, some acts including an acrobat were “unable to travel [due to] Sinn Fein disturbance in Dublin”. The cinema materials in the Liam O’Leary Archive give an idea of the architecture of the buildings, the films shown during the century and individual and collective memories. This section of the archive is a fascinating insight into the social life of Ireland when cinema was arguably the most popular form of entertainment, among all classes of society.