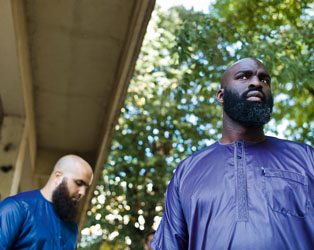 This film was released on the 4th of September 2020, and is no longer screening.

Montfermeil, a tough working class district in eastern Paris, is featured prominently in Victor Hugo’s titular classic. The present day living conditions, as suggested by Ladj Ly’s riveting Oscar-nominated debut feature, scarcely seem to have improved. Stéphane (Damien Bonnard) has joined the area’s Anti-Crime Squad, where he is teamed with Gwada (Djebril Zonga), of African descent, and Chris (Alexis Manenti), the confrontational, ethically compromised leader of the trio. Together they patrol the mean streets of the notorious Le Bosquet banlieue, where Muslim and African factions wage territorial battles. The theft of a lion cub from a visiting circus by youngster Issa (Issa Perica) sets off a sequence of events that swiftly escalate out of control. Bracingly current in its depiction of French society on the brink of anarchy, Ly’s thrillingly-staged social realist thriller crackles with energy and nervous tension.