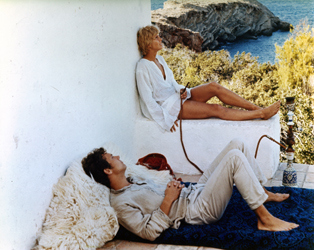 Les Films du Losange was founded in 1962 by Barbet Schroeder and Éric Rohmer. Schroeder produced – and played – that year in Rohmer’s The Girl at the Monceau Bakery, the first of his Six Moral Tales. Barbet Schroeder’s directorial debut was in 1969 with More, and it was then that Pierre Cottrell joined the adventures of Le Losange, producing films by Schroeder, Rohmer, Eustache and others.

By 1975 Margaret Ménégoz had become head of Le Losange, at which time Barbet Schroeder’s Mistress and Éric Rohmer’s The Marquise of O were both in production. Then followed Le Losange’s expansion in 1986 into film distribution and later into international sales. As Margaret Ménégoz put it: “Les Films du Losange was born out of a strong desire to be independent”, and as such made a significant contribution to the development of the Nouvelle Vague. Le Losange’s prestigious catalogue now stands at over 80 films, including new works by Michael Haneke, Jacques Rivette and others, while the company is one of the few remaining independent production and distribution companies.

This special programme celebrating 50 years of Les Films du Losange includes More, Louvre City and Hidden, and we are delighted to premiere its latest production as the opening film of this year’s Festival, Michael Haneke’s Love.

The IFI would like to thank at Les Films du Losange: Margaret Ménégoz, Marine Goulois, and particularly Thomas Petit for his advice and support; the French Embassy in Ireland and the Institut Français, Paris for their assistance with mounting this programme.

This season is the third part of the IFI’s Les Films du Losange 50th Anniversary programme. This programme consists of three parts: Part One is showing in October, Part Two concerns the work of Éric Rohmer while this part will run as a strand of 2012 IFI French Film Festival.