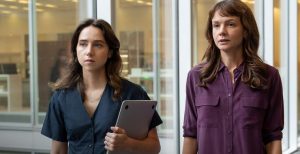 This review was written by Transition Year student, Maeve, in November 2022.

She Said, an adaption of the 2019 novel of the same name, follows two New York Times reporters, Jodi Kantor (Zoe Kazan) and Megan Twohey (Carey Mulligan) in their journey to reveal Harvey Weinstein’s criminal treatment of female employees to the public, as they also endeavor to put an end to the culture in Hollywood that allows abusers to silence and disenfranchise their victims. The film prides itself on its integrity – facts are at the forefront in this tale of heroic journalism.

She Said begins on a less than hopeful note- a pregnant Megan Twohey has recently published an article about Donald Trump’s sexual harassment, after convincing one of his victims to come forward and speak on the record. Both Megan and her source receive threats and intimidation after the publication. Megan’s come in the form of horrific phone calls, some anonymous, some not, including one memorable call from Trump himself. Her source is afraid to leave her home- at one point, she receives an envelope of human feces in the post. Justice is not served, and despite the publication of this story, Trump wins the 2016 election. As his victim’s life is worsened undeniably, he is sworn in to one of the most powerful positions in the world. This harrowing tale reminds those who may have forgotten of the attitude people held, and still hold, towards sexual assault. It outlines the enormity of the task our two leads will now face – we now know that even if they break the Harvey Weinstein story, people may simply not care. This valid fear is an undercurrent to the rest of the movie, and it makes for a compelling opening.

As we move through the film, we follow Megan and Jodi as they interview numerous victims of Weinstein – famous actresses, ex-assistants and newcomers who were excluded from the industry after experiences with Harvey. Their stories, while all unique, have a similar power dynamic at play. Harvey promises the young girls a foot into the industry in exchange for sexual favors- if they refuse, they are physically overpowered. If they complain, they are ousted from Hollywood. Some of the girls were paid settlements, all of them have been left traumatized. Nobody is willing to go on the record- be it due to NDAs, fear of persecution or a belief that even if they do, nobody will care. Megan and Jodi find it near impossible to convince these women to go on the record- after all, they cannot guarantee justice of any form. To go on record is to sacrifice one’s safety in the hope that some seismic shift of the system will occur, and not trusting the odds of that happening is understandable. Jodi and Megan struggle with the morality of convincing women to put themselves at risk in the hopes that they can save potential future victims.

The story excels at portraying Weinstein’s victims. We are forced to sit with them as they tell journalists their stories, as intimate close-up shots pressure us into empathizing with these girls. This film does not depict gratifying scenes of sexual assault that would add some gross entertainment value. Instead, its focus is on giving agency to victims who tell their stories in a dignified matter- sharing what they wish to, and nothing more. Weinstein himself, played by Mike Houston, is only heard screaming angrily down telephones, or sending legal threats through his more personable lawyer (Peter Friedman). At no point is his face shown. This movie is not about him or his side of the story, and it does not hesitate to make that clear. The movie also manages to not isolate its audience- for a film that discusses Hollywood and follows two journalists who stroll the streets of Manhattan, it is surprisingly relatable. This is achieved through recurrent themes of everyday female hardship. Characters face challenges that all women will know of, Toohey and Kantor, both mothers, discuss struggles with post-partum depression, and confront the stress of balancing their professional and personal lives. At one stage, they are harassed in a bar. One of Harvey’s victims is diagnosed with breast cancer, and she undergoes a double mastectomy. These inclusions of experiences of womanhood remind us that although the people we are following seem removed from our own reality, there are some experiences that are universal- and feeling voiceless after sexual assault is one of them.

Although the film’s factual integrity is admirable, it causes it to drag slightly in the middle. We follow the events that occurred in real life so closely that some impact is lost in the slog of day-to-day journalism and endless red tape faced by the protagonists. Its lack of dramatization causes the story to feel monotonous at times, never truly reaching a climax until its final few moments. Occasionally, the environment in the journalists’ workplace feels off. Ronan Farrow’s journalistic work on the Weinstein story is mentioned in a disconcerting way more than once- Toohey and Kantor appear to want to rush the publication of their article so Farrow won’t release his piece with the New Yorker first. This moment, while probably accurate to how journalists are pressured by editors, seems at odds with the message of the film, and does not fit into Toohey and Kantor’s previous characterization as two women who are breaking this story to help other women, rather than for fame and professional success. Excluding these moments would have left the film seeming far more harmonic.

She Said, while not a perfect film, carries an important message. Anybody looking for a unique perspective on the beginning of the Me-Too movement can find one here. Perhaps She Said does not have the espionage and grandeur of more famous journalism films, but its combination of beautiful acting performances from Carey Mulligan and Zoe Kazan, Maria Schrader’s crisp directing and a prevailing message of empowerment and justice merge to make it a worthwhile watch.