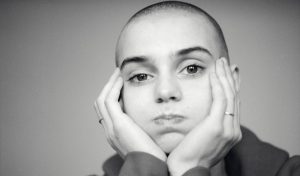 This review was written by Transition Year student, Gaius, in October 2022.

Having known almost nothing about the legendary singer and song-writer Sinéad O’Connor, I was blown away by Kathryn Ferguson’s latest documentary “Nothing Compares”. It details Sinéad’s rise to worldwide fame and how her outspoken nature and controversial actions led to mass burnings of her CDs across America and her exile from mainstream media.

Instead of your run-in-the-mill, floating head type of documentary that usually follows one’s rise to the top through interviews of friends and family, Ferguson opts to do something interesting. She lets various voice-overs from people who knew Sinéad and sometimes Sinéad herself to accompany some old footage and, occasionally, some made-up scenes of the events. This, combined with the music and editing, really paints a heart-warming and empowering picture that left me awe-struck.

Going into it, I expected to see the nitty and gritty of how she made her music. Rather, the documentary explores more of Sinéad’s relationship with her music and her fame. It also explored the trauma that she had experienced from her mother and from her time in a Magadelene Asylum. It explored her political beliefs; her defiance against the Catholic Church and social issues, like abortion rights and racism.

Throughout it all, you never felt like Sinéad was being loud-mouthed and pretentious for the sake of it. She stayed true to herself. The documentary portrayed both her soft-spoken intimate side and the rebellious popstar image that her music made her known to be. This compounded the emotional impact of that infamous performance on SNL and her subsequent exile from mainstream media.

That being said, I would’ve liked to have seen how she dealt with the psychological turmoil she faced in the years after; from being ridiculed by the media and the amount of hate she received, to how she felt about her music not reaching the same amount of people. Instead, we fast forward to modern day. We are shown the legalisation of same-sex marriage and the legalisation of abortion in Ireland and many other similar events. Ferguson deliberately tells us how Sinéad indirectly influenced these moments in history.

By the end of the film, the entire cinema, including me, was left sitting there with only Sinéad’s powerful voice to fill the room. In my opinion, this was probably one of the best stories I’ve seen about courage and feminism. It spoke about it in a realistic way, without risking the feeling of being dumbed down or obnoxious. This is definitely worth seeing if you are either a fan of Sinéad O’Connor or are just curious about the Irish singer.