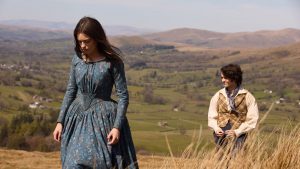 This review was written by Transition Year student, Annabell, in October 2022.

One of the many scenes that I loved in the film “Emily” was when she showed off how much French she has learned since her sister Charlotte has been gone, her sister thinks little of her and is often mean to her throughout the film, Emily tells her, in French how sorry she is for her sister that she is so small minded and that she has heard how Charlotte talks about her behind her back calling her “The Strange One” Emily tells her how she doesn’t care what Charlotte thinks of her anymore. I think that this is a great example of how to stand up for yourself respectfully.

This film incorporates several different topics and issues such as child abuse, family, bullying and as well as that Emily expresses her opinions on religion and social expectation of women at the time. In the beginning of the film, we are introduced to Emily (Emma Mackey), her two sisters Charlotte (Alexandra Dowling) and Anne (Amelia Gething), their brother Brantwell (Fionn Whitehead) and their dictating father (Adrian Dunbar). Emily’s mother has passed away, so their aunt Branwell is raising the children along with their father.

Emily is a spirited girl who is eager to please her father. She is highly intelligent and very opinionated. Emily has a talent for storytelling and a broad imagination. During the film we see Emily and her brother Brantwell become close friends as well as siblings. Under his influence he convinces Emily to act in ways that she wouldn’t normally.

Brantwell is a disobedient young man who unlike Emily is eager to disobey their father. He values his freedom and his writing more so than their father’s approval and social status.Brantwell himself is also a writer. Hecares deeply for his sister and is disappointed when Emily catches the eye of William Weightman. Near the end of the film we see that Brantwell values Emily’s opinion more than others and that he wants to protect her from the wrath of their father. Brantwell Bronte died of marasmus, Emily at his bedside.

William Weightman is a religious man; he is the pastor of the local church, and he was the love interest of Emily. Brantwell and William do not get along in the film. Emily and William got off to a hateful start throughout the film Emily challenges the sermons given by Reverend Weightman. Emily clearly does not like William but when her father demands that she take French lessons from the pastor, their feelings towards each other start to change. Their relationship ended when William put his devotion to God above his love for Emily.

A scene that I found interesting was when Emily and Brantwell stood on top of a hill, Brantwell rolled up his sleeve and showed Emily his tattoo “Freedom of Thought” it read. The two began to shout the phrase as loud as they could from atop the hill, not caring if anybody heard or if anyone would judge them.

Overall, I really enjoyed the film.This film is a good example of how important it is to follow your dreams and to not be afraid of other people’s opinions. I found the film really inspiring and I liked the way that the film answered the first question, which was also the first line of the film.