Paweł Maślona’s blackly comic first feature mirrors the multiple narrative approach of films such as Robert Altman’s Short Cuts (1993) or compatriot Jerzy Skolimowski’s 11 Minutes (2015). Here, characters endure a variety of anxiety-inducing situations, from the married couple seated beside the passenger from hell on a bumpy plane ride, to the woman suffering a painful meeting with her ex, to the webcam model whose work is interrupted by a stream of unannounced visitors. As Maślona ratchets up the tension in each situation, he also proves expert at finding the humour therein, making for a film that will provoke laughter from viewers even as they watch through their fingers, cringing at the relentless discomfort of the circumstances in which characters find themselves. 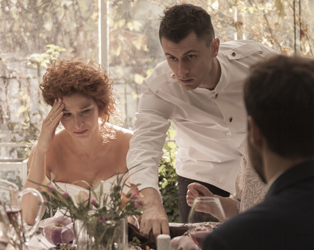