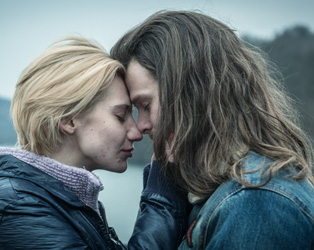 This film screened on 8th December 2018.

With films such as In The Name Of (2013) and Body/Ciało (2015) receiving international acclaim and awards from major film festivals, Małgorzata Szumowska has become one of the most significant contemporary Polish directors. In Mug, Jacek (Mateusz Kościukiewicz) might be expected to be at odds with his small, insular community, given his love of heavy metal, dishevelled appearance, and desire to escape, but is in fact not only accepted, but well-liked. However, following an accident that requires him to undergo Poland’s first face transplant, the attitudes of his neighbours, his girlfriend, and even his family change, making him an outsider in his own home. Szumowska’s approach balances playfulness with more barbed comments on contemporary Polish society in this dark satire.