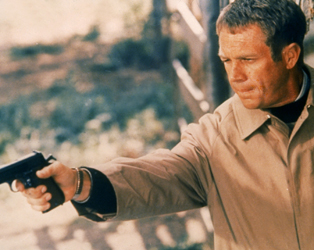 Jim Thompson’s crime fiction has been adapted by directors such as James Foley (After Dark, My Sweet, 1990), Stephen Frears (The Grifters, 1990), and Michael Winterbottom (The Killer Inside Me, 2010), while Thompson also co-wrote the screenplay for Stanley Kubrick’s The Killing (1956).

Sam Peckinpah’s take on his work stars Steve McQueen as ‘Doc’ McCoy, inmate of a Texas prison, who persuades his wife Carol (Ali McGraw) to use her wiles on a corrupt and influential businessman in order to secure his release. In return, Doc is forced to participate in a bank robbery that quickly goes wrong, forcing the troubled couple on the run in an entertaining thriller replete with Peckinpah’s trademark balletic violence.