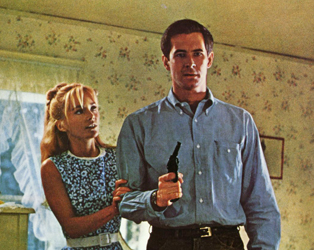 The first film from director Noel Black is a jet-black comedy stars Anthony Perkins as Dennis Pitt, recently released from a mental institution. A compulsive fantasist, Dennis finds an eager listener in teenager Sue Ann (Tuesday Weld), who is entranced by his tales of life as a CIA operative.

When he brings her along on a supposed mission to foil a Communist plot, the truth of what lies behind Sue Ann’s innocent face is revealed when she murders a security guard without hesitation. As the body count grows, Dennis is reduced to the status of horrified bystander, subject to her manipulation and cold-blooded nature.