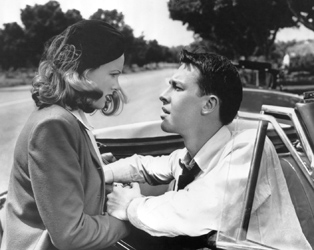 With a screenplay by the then-blacklisted Dalton Trumbo, Gun Crazy features John Dall as Bart Tare, a young man who, despite his gentle nature, is fascinated by guns, spending some time in reform school as a teenager for the theft of one. Following a spell in the army, he meets and marries carnival sharpshooter Annie Laurie Starr (the late Irish actress Peggy Cummins).

However, Laurie’s life is one of crime, one in which she forces her husband to become complicit. Featuring a bravura one-take sequence of a bank heist, the film is something of a precursor to Arthur Penn’s Bonnie and Clyde (1967) in its audacious blending of violence and sexuality.