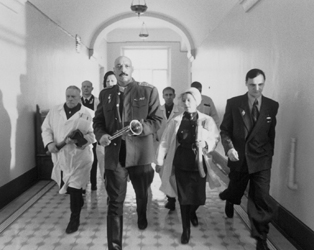 Titled after the apocryphal expression of Soviet security chief Beria while rushing to Stalin’s deathbed, Aleksei German’s (Hard to be a God, 2013) film distils the anticipation and anxiety in the Moscow air in January 1953 as the despot lay dying. German reflects tectonic political shifts through individual experience, following a surgeon and his family who find themselves vulnerable as the “Doctors’ Plot”, an anti-Semitic conspiracy accusing Jewish doctors of planning to assassinate Soviet brass, takes hold in the public imagination.

Originally released in 1998, and now presented in a beautiful new 4K restoration, Khrustalyov, My Car! is regarded as the inspiration behind Armando Ianucci’s The Death Of Stalin (2017), and was named “one of the great films of the 1990s… a brilliantly directed, unrelentingly grotesque, savagely bleak comedy” by J. Hoberman of The Village Voice.