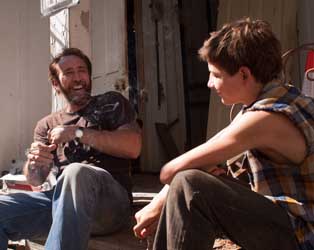 Celebrating the release of Nicolas Cage’s new film Joe, opening Friday, July 25th at the IFI, we have some great goodies to give away, courtesy of our friends at Curzon Film World/Artificial Eye! One lucky winner will get: a Joe film poster, Joe trucker hat and a Nicolas Cage DVD bundle with films: Wild at Heart, Leaving Las Vegas, Vampire’s Kiss and Face/Off .

After flirting with the mainstream in a number of stoner comedies, David Gordon Green returns here to the more personal feel of his earlier films (George Washington, All the Real Girls). Making a parallel return to form is Nicolas Cage as an ex-con who, although often good-spirited and kind-hearted, must also control a hair-trigger temper, his fear of which has caused him to keep a degree of detachment from others. He employs Gary (Tye Sheridan, Mud), a 15-year-old trying to look after his mother and sister financially while protecting them from his shiftless, violent, alcoholic father (the outstanding Gary Poulter, a local homeless man who had never acted before).

To enter, simply answer the question below along with your name and email address.

Competition closes at midnight, Sunday, July 27th, 2014. The winner will be contacted by email shortly after. (See IFI Terms and Conditions regarding prizes and competitions.)