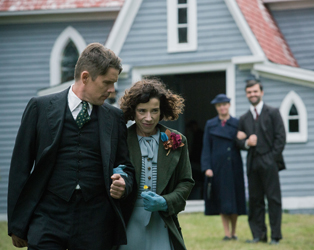 July 27th 2017: The Irish Film Institute (IFI), as part of its key strategic objective to reflect a diversity of cinematic perspectives, is proud to introduce the F-rating to its monthly and festival programming. From August, any film that is directed by a woman, and/or is written by a woman, and/or features significant women on screen in their own right will receive an F-rating. Aisling Walsh’s Maudie and Kathryn Bigelow’s Detroit are among the first films to receive this rating at the IFI.

The F-rating was originally developed by the Bath Film Festival in 2014 as a way to champion the substantial creative contributions by women to the film industry. A number of cinemas and festivals worldwide have already subscribed to the initiative, while IMDb now has over 22,000 films in their database classified as ‘F’.

Commenting on the introduction of the F-rating, IFI Director Ross Keane, said, ‘The IFI is committed to delivering a broad, diverse and inclusive range of films, representing different voices, eras, genders and cultures. We’re delighted to be introducing the F-rating which allows us to be fully transparent about gender representation across our various programmes, and highlights women both on screen and behind the camera.’

The IFI has a long-standing commitment to screening the work of female filmmakers. In June this year alone, over 50% of the films screened at the IFI were directed by women. This year has already seen the IFI collaborate with the Feminist Film Festival Dublin on a screening of Barbara Loden’s Wanda while, since January, the Institute has showcased the work of Irish filmmakers such as Laura McGann, Juanita Wilson, Neasa Ní Chianáin, and Emer Reynolds, alongside internationally acclaimed work from Kirsten Johnson, Maren Ade, Kelly Reichardt, Icíar Bollaín, Julia Ducournau, Julie Dash, and Nicole Garcia.

The introduction of the rating also coincides with a special August ‘Director in Focus’ strand featuring Aisling Walsh. Walsh will participate in a career interview with producer Tristan Orpen Lynch on August 15th, while there will be a rare screening for Walsh’s 2003 drama, Song for a Raggy Boy, on August 16th.

Other films to receive the F-rating in August include Amanda Lipitz’s documentary Step, Pete Docter’s Inside Out, screening as part of the our Bigger Picture strand and co-written by Meg LeFauve, as well as two films from Dark Corners, our season of films from the Weimar Republic: Lotte Reiniger’s The Adventures of Prince Achmed and Leontine Sagan’s Mädchen in Uniform.