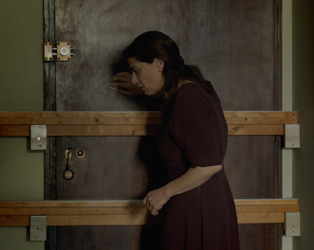 Barricaded inside her Damascus apartment, Oum Yazan (Hiam Abbass) struggles to keep her extended family safe from harm as conflict rages outside. They are the last to leave the building, and have given shelter to a young couple and their baby who have been bombed out of their upstairs home.

Oum has witnessed an incident she determines to conceal, lest it blow the cover on their fragile hiding place; her increasingly fraught attempts to control the hopeless situation raise the tension to unbearable levels.

With the action restricted to the interior of the apartment, Philippe Van Leeuw’s second feature is an intense, claustrophobic work which is anchored by the great Hiam Abbass, who gives a compelling portrayal of a woman desperately clinging to a semblance of normality as her family life hangs by a thread.