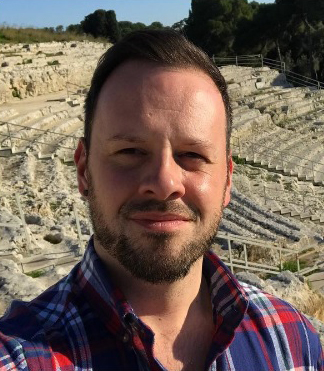 In the first of a new series, we’re taking a look Inside the IFI to meet some of the staff and find out what they really do. And the first team member up is Aaron Healy, IFI Player Coordinator.

What does your job entail?
My role is really mixed. I work closely between two departments here at the IFI, the Archive and the Marketing department. My main duty is to help curate content for the Player itself but with that I also digitise, edit and write the descriptions and copy for each to give it context. I also make any promotional material for the Player whether it’s for online or broadcast or in-house here in the cinema. I liaise on a regular basis with film donors and copyright owners as well as with members of staff in the IFI who have a wealth of knowledge on the collections and films. Our aim this year is to develop the IFI Player even more this year so a huge part of my role will be assessing what way we can grow it further and make it the best experience for our audience.

Can you describe a typical day?
No day is the same, one day I could be cutting promos for new material we are about to launch and another can be inputting data on our database or writing copy for a new collection.  In an average week, my days would be a mix of editing content, writing copy, attending meetings and screenings with the Archive team, organising online promotional material with Marketing as well as monitoring and checking our analytics and seeing what people are enjoying the most.

Do you have a favourite experience from your time at the IFI?
My role is so varied and diverse that there are so many different elements, from creative to technical that I get to enjoy  but my favourite moment was when a lady called saying she saw a film on the player that showed her when she was about 4 years old with her mum outside Arnott’s department store in 1954.  She had lost all her family photos in a fire years ago and had none of her and her mother together. She called to say thank you for making the film available and that it made her so happy. I took a hi-res screen grab of the moment and posted her a printed photo of it. That was one of my favourite experiences so far, but one of many big and small.

Do you have a project/assignment you’ve worked on that you’re particularly proud of?
Launching the player itself back in September was a huge proud moment for me. As it was a new department/product for the IFI, there was no set rule or structure in place and all the basics had to be figured out and the day to day workflow needed to be established. Working closely with Shauna in Marketing and Kasandra, Head of the IFI Archive, and her Archive team has made it such an enjoyable experience as not only are they world class leaders when it comes to Film Archiving but they helped establish essential elements in the process from what films we would include on the player, the file types we would need to work with, the storage requirements to filing systems all the other essential backend work that nobody sees but is crucial in making these wonderful films available online. We launched with such a variety of content on the player that it was a huge task to take on but it was all worth it and we have learned so much along the way.

Is there another initiative or project at the IFI which has really impressed you?
Because I work so closely with the Archive team seeing what they are doing when it comes to archiving it’s really exciting. Kieran’s expertise on coding and developing new processes when it comes to digitising and archiving is so impressive. He shares his finding with a huge global online community of Archivists and just seeing how it’s constantly growing and evolving on a daily basis through this knowledge sharing makes it really unique and something that I just find fascinating.

What makes the IFI unique?
I think the people make it unique. Its home to one of the largest Film Archives in Europe, an iconic cinema that hosts many brilliantly programmed festivals and educational screenings as well as a wonderful meeting point with the café and bar but, with all this, at its heart is a group of people who love what they do and are passionate about it. It’s the team of amazing dedicated people that make it unique and unlike anywhere else I have worked.

If you could meet any film star or filmmaker, living or dead, who would it be and why?
I want to say some classic iconic director or the likes of James Dean or Marlon Brando (who I would like to meet) but I would have to say Kristen Wiig, former SNL cast current comedy/drama actress purely because she is one of very few people who makes me laugh with just a grin or a look. Her comic timing is beyond on point and she has also proven herself capable of taking on more serious roles, The Skeleton Twins, Nasty Baby and Welcome to Me. She is just one of those actresses that I could watch in anything and love because she is captivating on screen and owns every role she is in and makes it her own. And also because I think we would be best friends and that would make me so happy!

What’s your favourite film of all time and why?
I’m always torn with this question because it really depends on my mood, I’m a big kid a heart and I adore Disney movies. Give me Aladdin, The Little Mermaid or Tangled to watch any day and I will  be happy but when it comes down to favourite film, it’s between Hitchcock’s Rear Window and PT Anderson’s Magnolia. Magnolia wins because when I watched the opening ten minutes (which could have been a short film in itself) I just fell in love with it. From the hugely ambitious interwoven storyline and outstanding ensemble cast, to the pitch perfect soundtrack by Aimee Mann that brilliantly compliments the film, it’s a movie that gave such an emotional punch it stayed with me for years. A lot of people didn’t like it or felt it was a little self-indulgent and I see that, but when I watched it when it was first released it had such an impact on me that it in a way shaped a major part of me and how you deal with grief and difficult times. I watch it every now and again and although I have to be prepared to watch it, it’s still that 3 hour emotionally draining romp I love.

What do you do when you’re not working?
I love to watch movies of all genres and read, mostly about new gadgets and technology. I am both fascinated and terrified of technology so I like to keep abreast of all new technological developments and companies. Shervin Pishevars’ “ Hyperloop” is my latest fascination, if you don’t know anything about it look it up, it’s going to change how we travel and how cities grow and develop.  I’m a major gadget freak too and I recently automated all the lights and speakers in our house so everything is pretty much connected and voice activated. My aim this year is to learn how to start coding so I can create more bespoke triggers and IFTTT functionalities. I’m learning through an app that my 5 year old niece uses to code games, so technically my 5 year old niece is showing me how to code. I also like to cook and travel. This year I plan to take more long-weekend breaks away and holidays instead of talking to my bathroom light and shouting at the toaster.

You can see Aaron’s hugely impressive work over on the full IFI Player site – with more films set to launch over the coming months.

Stay tuned for more interviews with the team Inside the IFI!