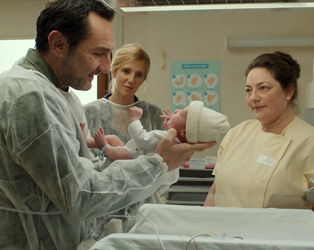 This film was released on Friday 31st May 2019 and is no longer screening.

Newborn Theo has been anonymously given up for adoption; under French law his mother has 60 days to reflect upon this decision and reverse it if she wishes.

Jeanne Herry’s second feature observes the manoeuvres of a number of disparate characters (doctors, nurses, psychiatrists, and potential parents) working in social care during this period of uncertainty, their combined concern for the infant’s future providing the narrative through-line.

Karine (Sandrine Kiberlain) is Theo’s primary caseworker, who liaises with Jean (Gilles Lellouche), the child’s initial foster parent. Another caseworker, Lydie (Olivia Côte), has been charged with finding a permanent family, and a third, Mathilde (Clotilde Mollet), handles Theo’s transfer from his birth mother to being in the care of the French state. Meanwhile adoptive parent Alice (Élodie Bouchez) waits for news of her application.