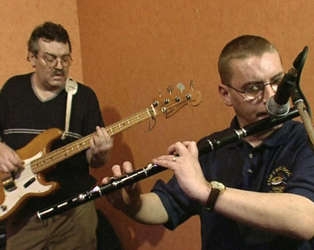 IFI and Tradfest reteam to present two powerful documentaries about traditional Irish musicians, a compelling supplement to the live music offerings at Tradfest 2020.

This screening will be introduced by Fintan Warfield, musician, former member of “Derek Warfield & The Young Wolfe Tones”, and Sinn Féin Senator with responsibility for Arts & Culture.

A Song for Ireland is one of eight documentaries made in Northern Ireland by Irish-American filmmaker Arthur MacCaig.  It traces a history of Ireland through music and explores how the nation’s musical heritage has been influenced by its long and tumultuous political struggle, one in which music and rebel songs became cultural weapons in its anti-colonial resistance. The film uses archival footage to chronicle key points  in Irish history – the 1916 Rising; the birth of the Civil Rights movement in Northern Ireland in 1969; the IRA hunger strikes in 1981 and the unfolding of the peace process in 2001 –  interweaving interviews with, and performances by, Irish and Irish-American musicians.

Filmed in Derry, Belfast and New York City, A Song for Ireland features music from Chris Byrne, Declan McLaughlin, Eileen Webster, Pol McAdaim, Maria Cahill, and the Wolfe Tones. Brendan ‘Bik’ McFarlane, an IRA leader imprisoned during the Eighties, and later a composer and singer, performs a number of songs with the group Tuan and discusses the historical and political roots of Irish music.

The screening will be followed by a Q&A and a short musical set with director Ciarán Ó Maonaigh and Paddy Glackin.

As Irish traditional music gained global recognition in the early 1970s, one of the foremost figures in the music industry was Dublin fiddle player Paddy Glackin.  As his peers in bands like Planxty, The Chieftains and The Bothy Band all went professional, Paddy Glackin chose another road.

A razor-sharp commentator on Irish traditional music, Glackin explores his reasons for not going professional at the height of his career, what made the music great at the time, and his thoughts on where the music is today. The film traces his career as he moved into broadcasting, presenting The Long Note on radio and The Pure Drop on television, and becoming the first Traditional Music Officer in the Arts Council, continuing to play music all the while.

‘Sé mo Laoch presents a revealing story that is both personal and political where we hear about Glackin’s family tragedy and his relationship with his father and his thoughts on Comhaltas Ceoltóirí Éireann, RTÉ and The Arts Council.